Eutypa dieback, caused by the fungus Eutypa lata, is one of the most serious
diseases of grapevines worldwide. Symptoms include external cankers on infected wood and internal necrosis of woody tissue, visualised as a wedgeshaped area of stained tissue if a crosssection is made of an infected trunk or cordon. Foliar symptoms comprising stunted shoots with chlorotic leaves, often cupped and with tattered margins, are caused by compounds produced by the fungus in the wood and transported to the foliage (Moller and Kasimatis, 1981; TeyRulh et al. 1991). The disease causes yield decline and eventually kills infected vines. Management of eutypa dieback includes prevention by protection of wounds in the wood and control through remedial surgery (Sosnowski et al. 2004a&b). Little is known about the epidemiology of eutypa dieback of grapevines, as much of the available information is based on research on eutypa dieback in apricots (see Carter 1991). Different cultivars display varying severity of foliar symptoms which may indicate degrees of resistance or tolerance to eutypa dieback. However, little is known about the growth of the fungus in grapevine wood, or of relative virulence of different isolates of E. lata towards grapevine. In the vineyard, delay between infection of wounds by ascospores and symptom expression can be between three and eight years (Tey-Rulh et al. 1991), hence there is a need for a bioassay which enables the rapid induction of symptoms to provide timely information on host-pathogen interactions. Moller and Kasimatis (1978) inoculated mature vines with mycelium of E. lata and observed symptoms one to three years later. Péros and Berger (1994) reported foliar symptom expression within 3-4 weeks of mycelial inoculation of unrooted cuttings in moist rockwool, however, recent attempts to repeat this have been unsuccessful (Creaser, M. and John, S., pers. com. 2002).

As part of CRCV project S2.2.4 “Diagnosis and management of eutypa dieback”, we are examining pathogen variation, growth rate and the production of chemical markers by E. lata in infected vines. Here we report a bioassay that resulted in foliar symptoms within eight months of inoculation with E. lata. This technique will aid in the development of early diagnostic tools and management techniques for eutypa dieback. 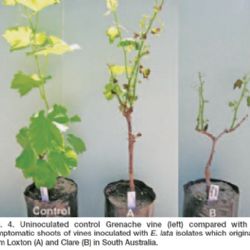