Botryosphaeria species can cause dieback and decline in nursery mothervines,
which produce the canes used for grafting and propagation into new plants.
These symptoms are similar to those seen in vineyards. However, the infected
canes usually appear symptomless when cut for propagation and the resulting
grafted plants also appear healthy when harvested as dormant plants after eight to nine months’ growth in the nursery field.

In mothervine blocks, the disease cycle of Botryosphaeria species is the same as it is in vineyards. The pathogens persist in infected wood from grapevines and many other woody hosts (on and off the vine), from which they produce spores (conidia) during high relative humidity (RH) or rain. The conidia are dispersed by splash and run-off of rain water and contaminate the surfaces of the shoots and may infect any trimming wounds. 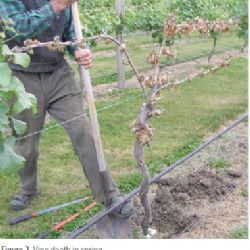